Bugatti is known for adhering to its own set of rules, consistently setting and breaking records for technical prowess and attention to detail. Getting behind the wheel of one of these beasts is a dream for many, but only a small percentage of the population can realize it.

Bugatti is well-known for producing cars that are more akin to works of art than standard automobiles. Take a look at Bugatti’s most impressive models to date, as well as its innovative engineering prowess.

Following the list, we explain why Bugatti cars are so expensive. If you’re interested in learning more about the history of this ultra-luxurious sports car, we’ll also walk you through the brand’s origins. 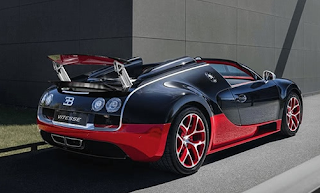 How many cars can claim that they require an airport runway to reach top speeds? The Bugatti Veyron, which was introduced in 2006, does exactly that: it is impossible to drive this supercar at high speeds down standard roads because you will simply run out of road too quickly. This is a car that takes no prisoners, accelerating at the touch of a pedal. The Veyron has a top speed of 415kp/h (258mph) and a 1,001 horsepower engine, making it the world’s fastest production car until its successors were released. It’s a truly exotic vehicle, meticulously crafted and outfitted with cutting-edge technology.

As soon as you get behind the wheel, you’ll notice the Veyron’s unmistakable confidence: putting your foot down is like tackling the rollercoaster’s biggest loop – terrifying and exhilarating all at the same time. It combines a harmonious balance of lift and downforce to accelerate from 0 to 100kph in 2.6 seconds. Because of the Veyron’s insane speeds, many systems and parts had to be designed from the ground up. It also has one of the world’s fastest gearboxes, a powerful braking system, and aerodynamics designed specifically for high speeds. 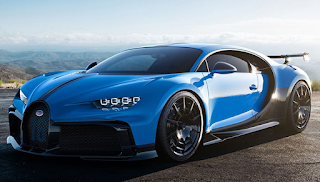 When the Bugatti Chiron takes off, you’ll only hear a slight hiss of air. When it was released in 2016, its brief, according to ex-president Wolfgang Dürheimer, was simple: it had to “be better than the Veyron in every way.” Bugatti accomplished the seemingly impossible feat of combining even faster speeds and a new level of immense power in the brand’s successor, the Chiron.

There’s no doubt about it: the Chiron is one of the most technologically advanced and luxurious cars on the market, capable of traveling at what appears to be the speed of light while maintaining a relaxed and carefree demeanor. With 16 cylinders in its eight-litre engine and a seamless body that holds it all together, it’s a car that shows off in the most casual way possible. It has an incredible 1,479 horsepower and can tackle corners at 200km/h (124mph) – faster than the top speed of many vehicles. 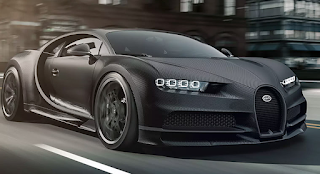 The Bugatti Chiron Noire was created as a bridge between the standard model Chiron and Bugatti’s “La Voiture Noire,” the world’s most expensive car, which costs at least $12 million. As a result, the Chiron Noire is inspired by La Voiture Noire’s sleek, matte black body and stylish features. The exposed carbon fiber, front spoiler, radiator grille, wheels, and Bugatti’s signature C-shaped design line are all matte black.

This one-of-a-kind vehicle is a luxury beast for minimalists, with interior parts in black and matte black aluminum trim, black seats, switchgear, and more. Of course, this truly unique vehicle includes all of the super-powerful elements expected of a Bugatti: a quad-turbocharged 8.0-litre W16 engine capable of producing up to 1,600 horsepower and a top speed to match. It’s a coupé with the luxury of a limousine and the power of a hypercar. 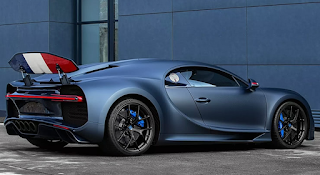 Bugatti released its 110 Ans Bugatti (which means “110 years of Bugatti”) three years after the original Chiron debuted as a tribute to its French heritage and to commemorate its milestone birthday. This was the Chiron’s first special edition, which surprised many because the model was originally supposed to have no special editions. Along with its signature luxurious features, the 110 Ans Bugatti pays tribute to France, with a special emphasis on the country’s colors.

The tricolor French flag appears on the mirror caps and the underside of the active rear wing, while other components, such as the brake callipers and wheel center caps, are painted French Racing Blue. The matte Steel Blue paintwork at the rear of the car was created using the brand’s complex process, and hints of the same color scheme can be found in the exclusive handcrafted interior. 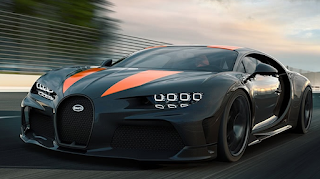 The Bugatti Chiron Sport is a true performance monster, ideal for those who fantasize about hitting top speeds at the slightest touch and cornering without pausing for breath. It was designed to be the ultimate supercar, with a firmer chassis and lightweight components. As a result, the Chiron has even sharper handling and exhilarating agility, all while maintaining the Chiron’s distinctively luxurious personality.

Bugatti went to great lengths to reduce the weight of this beast in order to fulfill its promise of being the ultimate sport-focused supercar. The brand managed to shave 20kg off the total weight of the car, making the Chiron Sport the first production car with carbon fiber windshield wiper arms, saving slightly more than one kilo. The interior is equally impressive, with an elegant material mix of Alcantara, leather, and carbon, as well as an optional finish of a black sporting touch. 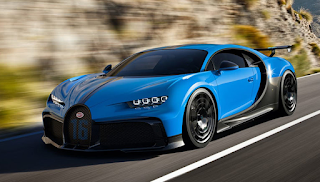 “Pure perfection” is a good way to describe the Bugatti Chiron Pur Sport, a daring evolution of the original Chiron that may be the first supercar to brag about being intentionally slower. Of course, “slower” is relative when this model can still cruise at 350kph with ease (218mph). The Pur Sport, unlike the other Chiron variants, is designed for handling, but it is not a track car. It’s a quick vehicle with excellent optimisation and the ability to whip around corners with ease.

Its specially designed tyres promise faster acceleration than previous models, as well as the benefit of being a dream to drive. Its production goal was to push the boundaries of performance, which it accomplished with significant technological improvements to the chassis, gearbox, and engine. 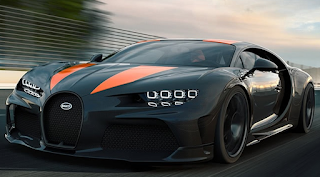 The Bugatti Chiron Super Sport 300+ is known for its breathtaking speeds, with its world-record-breaking achievement of breaking the 482kp/h (300mph) barrier. Bugatti challenges itself to believe in the impossible with the release of each new car, and this one is no exception. The Super Sport 300+ is based on the standard Chiron model and features extended and aerodynamically optimized features for extremely high speed performance.

Only 30 examples of the car are currently being built, with a release date of 2021 expected. This machine exemplifies the brand’s technical refinement, masterful craftsmanship, and incredible attention to detail. 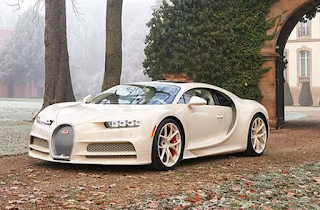 Are you looking for the ideal companion for La Voiture Noire? The Bugatti Chiron Hermès Edition has arrived. This one-of-a-kind Chiron is owned by popular Youtuber and supercar collector Manny Khoshbin and features an all-white exterior and interior as well as a $150,000 sky view glass roof.

It’s the epitome of luxury, with Hermès paint, cashmere fabric, and one-of-a-kind badges and a special front “H” horseshoe grille. This hand-built supercar is said to have taken four years to complete, and the end result is elegant, simple, and luxurious. The bottom of the rear wing is decorated with a Hermès Courbettes horse pattern, and the entire rear bumper is painted to match the body color. It’s a stunning French-built speed machine.

If time is money, the Bugatti Divo more than justifies its asking price. Based on the Chiron but promising even faster speeds, it’s a work of art on the road with 1,500 horsepower and speeds that will make you rethink the laws of physics.

The Divo outperforms previous Bugatti models in terms of performance, with a more progressive design language resulting in blazing fast acceleration. This supercar has an electronically limited top speed of 380kp/h (236mph) and can reach 100kp/h in 2.4 seconds.

This Bugatti is named after French driver Albert Divo, who won the Targa Florio race twice for the brand in the 1920s. It’s 35kg lighter than the Chiron, but it still has upgraded versions of all of the car’s core components.

But it’s the limited edition numbers that make this car stand out. Only 40 Divos were produced, and each one was claimed before the first was even delivered. Because there are a limited number, it is possible to spend months or even years fine-tuning its unique appearance and statistics into a bespoke supercar. The Divo’s exceptional level of sophistication makes it a car that effortlessly turns heads. 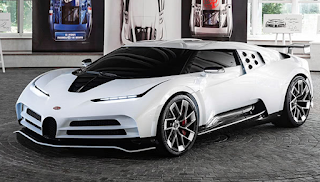 “Centodieci” translates to “110” in Italian, but even rating this car a 110/100 would be unfair. The Bugatti Centodieci combines exceptional design and flawless technology to create a one-of-a-kind hypercar. For a variety of reasons, this beast of a vehicle is a standout drive. As the name implies, it pays homage to the Bugatti EB110, but it takes the stage as the EB110’s cooler, sleeker, and more confident younger sibling.

Where do I begin with the most impressive features of this supercar? With 1,600 horsepower and unparalleled speed and performance, it was once again the brand’s most powerful vehicle upon its release. It’s a modernized EB110 with a new range of deep-seated front spoilers, three-section air intakes, and a low-dropping front. It has a top speed of 380 kp/h and can accelerate from 0 to 100 kp/h (0 to 62mph) in 2.4 seconds (236mph). Higher speeds will take 6.1 seconds to reach 200kp/h (124mph) and 13.1 seconds to reach 300kp/h (186mph). This final time is 0.5 second faster than the Chiron.

In true Bugatti fashion, the Centodieci was produced in extremely limited quantities – only ten cars were built and sold almost immediately. Because of the small number, the brand is able to create almost one-of-a-kind supercars for each Centodieci’s new owner, which are meticulously customized. 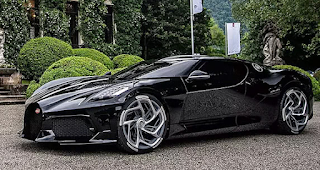 La Voiture Noire is the most expensive new car ever sold, according to Bugatti, and only one will be produced. It’s a one-of-a-kind hypercar that combines speed, technology, luxury, and aesthetics into something so impressive that words can’t really do it justice. La Voiture Noire is automotive haute couture for car enthusiasts. Its handcrafted carbon fiber body is sleek and timeless, with an elegance that rivals anything in its class.

La Voiture Noire pays homage to the art deco design of the Type 57SC Atlantic, one of the world’s most sought-after classic cars, while using the Chiron as its foundation and turbocharging every component of both. It’s a stunningly beautiful machine with 1,500 horsepower that serves as a manifesto for the Bugatti aesthetic.

Its sculptural qualities are enhanced by a quad turbo W-16 engine with a top speed of 420 kp/h (261mph) and the ability to race from 0 to 100 kp/h in 2.5 seconds. It’s fair to say that La Voiture Noire is more of a work of art than a vehicle. Bugatti claims that it approached only one customer with sketches and ideas for the car, which was then purchased on the spot.