Indeks
Home Luxury Car The 2022 Mercedes-EQ EQS: Six Things We Like and Four Things We Don't 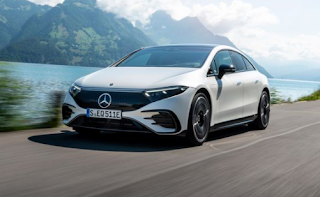 Mercedes-Benz has joined the ranks of electric vehicle manufacturers — and in a big way. The new luxury flagship EQS is the first of six electric vehicles that will be available within the next two years, all of which will be marketed under the new Mercedes-EQ sub-brand.

To begin, two EQS models are available: the EQS450 Plus and the EQS580 4Matic. The performance-oriented AMG EQS sedan, as well as the EQS SUV and EQE mid-size sedan and SUV, will follow. All will be built on a new platform designed specifically for electric vehicles, dubbed Electric Vehicle Architecture in Mercedes-speak.

The EQS, which is aimed squarely at competitors like the Tesla Model S, is more tech-focused and less conservative than the more coddling and traditional S-Class. However, it is not intended to be a replacement for the S-Class, which was also redesigned for 2021.

We recently had the opportunity to test the EQS450 Plus and EQS580 4Matic and were very impressed. The EQS is loaded with the tech features that Tesla buyers prefer, as well as Mercedes-Benz levels of powertrain refinement and sophistication. But not everything is perfect. Six things we like about the 2022 Mercedes-EQ EQS, and four things we don’t.

Continue reading for a quick rundown of the good and bad. Click the link above to read Aaron Bragman’s full review for a more in-depth assessment. 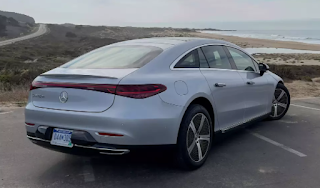 Both EQS variants, like the S-Class, are smooth, quick, and quiet, with the added benefit of an electric powertrain’s instantaneous response and torque. The EQS450 Plus is a single-motor rear-wheel-drive model with 329 horsepower and 419 pounds-feet of torque. The all-wheel-drive EQS580 4Matic is powered by a dual-motor setup that produces 516 horsepower and 631 pounds-feet of torque. Both make use of a 112-kilowatt-hour lithium-ion battery that is mounted beneath the floor. Mercedes claims a 0-60 mph time of 5.9 seconds for the EQS450 Plus and 4.1 seconds for the EQS580, which are both impressive for a vehicle of this size. 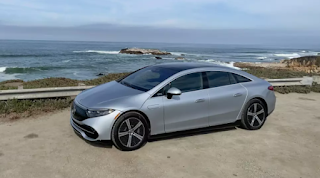 Standard rear steering, which allows the rear wheels to turn up to 10 degrees in the opposite direction of the front wheels for increased maneuverability in low-speed situations or turn with the front wheels for faster lane-change response, is a big help with EQS handling. It makes a significant difference in the overall feel of the car, allowing for a tighter turning circle in tight quarters and a more agile feel on two-lane roads. As a result, the car feels smaller and more agile than its size would suggest.

The EQS wafts over bumps thanks to standard air suspension, giving it a hushed and isolated feel far removed from any road imperfections. The steering is accurate but provides only moderate feedback, similar to an S-Class. The EQS, which is more of a grand tourer than a sports car, is tuned for a painless driving experience rather than carving corners, and it succeeds. If you want a more engaging driving experience, you might want to wait for the AMG version. 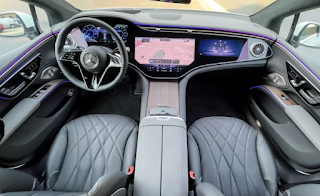 When you get behind the wheel, the first thing that catches your eye is the aptly named Hyperscreen, a massive 56-inch-long curved glass surface that spans the dashboard and houses three separate digital displays. A 12.3-inch digital instrument cluster sits in front of the driver, while a massive 17.7-inch center touchscreen houses navigation and other controls. A third 12.3-inch screen sits ahead of the front passenger, allowing the co-pilot to access menu functions.

Mercedes-Benz has long been a pioneer in augmented reality features, and the EQS builds on that legacy. On the center screen, a front camera shows a view of the road ahead, with arrows overlaid to indicate your intended route. Even better, similar blue arrows are displayed on the head-up screen in the driver’s line of sight at the same time, making them easier to see without taking your eyes off the road.

The EQS is well-equipped to compete in the luxury car tech wars, but Mercedes-Benz has made some sacrifices in other areas to offset the cost of all that technology. The availability of 64 different interior lighting colors does not compensate for lower-quality materials and execution. The center console, for example, is made of hard plastic with a hollow feel. There was also a lot of windshield reflection from the plastic that surrounded the head-up display. Overall, decisions like these make the interior feel inferior to that of the S-Class.

With all of its powertrain smoothness and sophistication, the EQS is a huge letdown when it comes to braking. The EQS, like many other EVs, combines electric regenerative braking with a conventional hydraulic system, with the driver able to select one of four levels of the former. The issue is that the systems do not work well together. Regardless of the setting, the pedal travel is long, and the brakes are spongy and provide little feedback. The most aggressive regenerative setting actually moves the pedal on its own, leaving your foot reaching for a brake pedal that is already depressed. 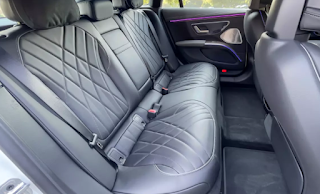 The interior not only falls short of Mercedes-Benz S-Class luxury standards, but its smaller dimensions make for a more cramped cabin. A narrower driver’s seat and low roofline contribute to a cramped feeling, and things don’t get any better in the back. The lower roof severely limits rear seat headroom, and the high floor forces you to sit with your knees up. 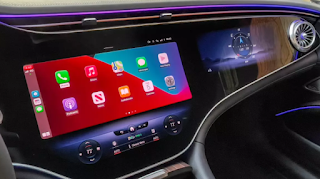 We’re not fans of the heavy reliance on touch-sensitive controls, which are generally more difficult and distracting to use. The big Hyperscreen is no exception, despite its impressive wizardry. But, thanks to its larger buttons, which are easier to use than small icons on smaller screens, its simple size at least helps to alleviate those frustrations.